Does Klaus Schwab have a mole in the post-2016 GOP? 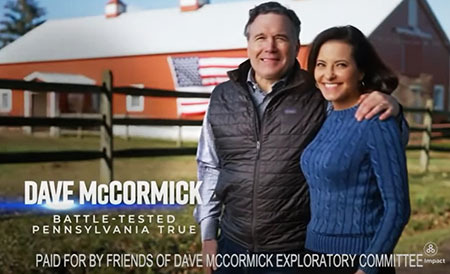 The Great Reset is donning an America First skin suit. And no one is seriously reporting it. Why is that?

WorldTribune has written two breakdowns detailing the globalist bona fides of David McCormick, ex-CEO of Bridgewater Associates, the largest hedge fund in the world, who is now attempting to purchase a U.S. Senate seat out of Pennsylvania on the backs of grassroots Republican voters.

Consider this Part Three. And it contains the most disturbing material yet.

McCormick’s wife Dina Powell McCormick, who can be prominently seen in some of the numerous television campaign ads the money-laden candidate is bombarding Keystone State residents with, is directly working with Klaus Schwab and his World Economic Forum (WEF) to enact his systemic world governance goals.

Powell McCormick is a member and co-chair of and active contributor to the WEF's "Global Action Group."

Kent Walker, who is now President of Global Affairs and Chief Legal Officer at Google, is another co-chair.

Powell McCormick's work at WEF is being utilized by the organization to lay out its vision for global governing power. Here is Klaus Schwab commenting on the WEF’s Davos Agenda 2022:

Quote of the Day from @ProfKlausSchwab, @wef Founder and Executive Chairman.

A Jan. 22 WEF paper on Davos Agenda 2022 authored by President Borge Brende is titled “These are the stepping stones towards global cooperation.” Brende writes:


As we enter the year 2022, there are two possibilities: greater geopolitical competition or greater global cooperation that lie ahead.

The question that needs to be answered is how the global context can be reshaped to promote greater cooperation.

Here are the stepping stones needed to promote greater cooperation, especially for challenges such as global inequity and climate change.

As the world enters 2022, we appear to be at a crossroads — with the possibility of greater geopolitical competition or greater global cooperation ahead.

Brende hails the big global vaccine push enabled by the coronavirus hysteria WEF did so much to foster and acknowledges how it aids the internationalist agenda:


The record speed at which safe and effective vaccines were developed during the first year of the pandemic was made possible by coordinated efforts among governments, businesses and research institutions. The BioNTech/Pfizer vaccine is made up of 280 components from 19 different countries....

The common thread over the course of the pandemic has been that when leaders have coordinated efforts, progress followed. But when companies or countries pursued self interest, global challenges mounted.

Brende refers readers to an accompanying Davos Agenda 2022 report co-authored by Powell McCormick as part of the Global Action Group. This report is titled "How to scale public-private partnerships for global progress." From her report, which is dated January 18:


The first order of business would be to unite the individual efforts of different countries. Today there are many public-private partnerships working in isolation, so advanced countries should create institutional mechanisms to link them together into a global network and direct them toward shared goals.

Beyond linking together those efforts already underway, public-private partnerships can help find new and innovative ways to leverage multi stakeholder relationships and scale impact. There is an opportunity for the public sector to provide the foundational capital or financial conditions necessary to support private sector innovation. Such innovations are important to ending the COVID-19 pandemic, not only by providing sufficient vaccines to poor countries, but in overcoming the logistical hurdles of a large scale vaccination campaign.

Powell McCormick wrote this at the very same time that her husband was pledging his fierce devotion to an anti-globalist American First agenda to Pennsylvania voters. Her WEF co-author Vali Nasr isn't as Trump friendly as her husband claims to be:

White Nationalism Is the Real Threat to the West. Not Islam. https://t.co/AeOtpMEjyf

good account by @RichardHaass on how in 4 years Trump undid what U.S. foreign policy had built and nurtured for seven decades https://t.co/46T85yy5vp

WorldTribune has documented Johns Hopkins' intimate connection to Bill Gates and the university's leading role in hyping the coronavirus hysteria campaign that ruled the world for two years. JHU, the World Economic Forum and The Bill & Melinda Gates Foundation were all partners in Event 201, a health pandemic war-game that was held in October 2019, only months before the coronavirus panic regime took hold.

So it makes perfect sense then that Vali Nasr would be welcoming Bill Gates onto the Johns Hopkins campus in 2018 for "A Conversation on the Future of US Leadership" in a global context.

Back to the Powell McCormick-Nasr report. Klaus Schwab could not have said it better himself:


There is also a need for new international frameworks to organize worldwide public-private partnerships. They could help coordinate policies across countries, but also provide the private sector the clarity it needs to pursue global agendas. Having a global framework will also make it easier to pursue projects and initiatives in multiple countries, and perhaps face less resistance from developing countries. International institutions and frameworks have a greater chance of securing China’s support than those centered in the U.S. and Europe.

At the same time, it is imperative that governments better coordinate on policy and shared inclusive growth objectives. This will not only provide a clear roadmap for public-private partnerships at the global level but will facilitate the regulatory coordination that is necessary for large public-private partnerships to succeed. The burgeoning “green” policy and regulatory frameworks could serve as useful templates for the future.

It cannot be stressed enough that this is the very core of the internationalist agenda that Klaus Schwab has been pursuing for years. In 2010, the WEF issued a report echoing Powell McCormick's themes titled "Everybody’s Business: Strengthening International Cooperation in a More Interdependent World." The paper was part of a WEF "Global Redesign Initiative." Schwab wrote the preface for the report, where he stated:


The Global Redesign process is now at a point where the findings, a critique of the gaps and failures in international cooperation and a series of specific proposals for how some of these shortcomings might begin to be addressed, are ready for discussion with policy-makers....

Particularly in the wake of the global economic crisis, we need to rethink our values, redesign our systems, and rebuild our institutions to make them more proactive and strategic, more inclusive, more reflective of the new geo-political and geo-economic circumstances, and more reflective of inter-generational accountability and responsibility.

The Global Redesign process has provided an informal working laboratory or marketplace for a number of good policy ideas and partnership opportunities in these respects that governments, international organizations, companies and other institutions may wish to consider incorporating into their own initiatives. We have sought to expand international governance discussions beyond the important work being done in the G20 on financial supervision and macroeconomic cooperation, encouraging the wider international community to take more pre-emptive and coordinated action on the full range of risks that have been accumulating in the international system.

This is globalism on steroids. It is a threat to the national sovereignty of the United States. And David McCormick, right up until the day he decided to run for the GOP nomination for a U.S. Senate seat, was on board.

Related: Who is Klaus Schwab? The ‘Great Reset’ is no conspiracy theory, January 12, 2022

In January 2021, McCormick, in his role as CEO of Bridgewater, touted his company's alliance with the World Economic Forum. From post on the firm’s website:


Bridgewater is a founding member of the World Economic Forum’s new initiative, Partnering for Racial Justice in Business. The initiative pulls together 48 leading global companies, spanning 13 industries, to improve racial and ethnic justice in the workplace. Each member of the initiative has committed to putting racial and ethnic justice on the agenda of their corporate boards, taking concrete actions as a firm to advance equity and justice, and setting a long-term strategy to become an anti-racist organization. At the time of the announcement, CEO David McCormick issued the following statement on Bridgewater’s commitment to this partnership:

“The time has come for corporate leaders to step up — it is long overdue. Bridgewater’s culture is rooted in equity and rewards based on merit. There’s a natural alignment between our way of being and the goals of the Partnership for Racial Justice in Business. We don’t claim to have all the answers on the biggest societal questions. But as a founding member of the Partnership, we are committed to ongoing improvement at our own company, and to collective action that creates more equitable workplaces across the world."


[E]very day the people you just saw stand around the world wake up in the morning wondering how they can move the needle and how they can create a better world.


We have identified, the staff and the board of the Atlantic Council, five issues that we think add up to a defining, historic moment. And I’ll list them rat-a-tat very quickly.

Among those he included:


...questions regarding the role of what Klaus Schwab dubbed the fourth industrial revolution, the most disruptive and, at the same time, most promising period of technological change that humankind has confronted.


I would also like to salute another group of global citizens, and those are our co-chairs for this evening’s awards, and they come from all corners of the world. I’d ask you to hold your applause until I list them all, and I’d ask them to stand as I – and remain standing as I list their names.

Among those he publicly called out:

When he had finished reciting all the names, Kempe asked the audience:


Please join me in giving a loud round of applause to these global citizens.

More cheers and applause followed. But why not watch for yourself? Here is rabid America First GOPer David McCormick singing a full-minute paean to globalism in his welcoming address for Global Citizen Awards attendees:

Klaus Schwab speaks at the 1:28:44 mark, and introduces the 2019 Atlantic Council Global Citizen honoree, globalist Dutch Prime Minister Mark Rutte. Rutte is very, very fond of Schwab, as he tells the gathering (1:34:33 of the video):


So some of my best friends had a hard time picturing me as a trendsetting global citizen. But as you pointed out, Professor Schwab – dear Klaus – this prize is all about strengthening international and especially transatlantic relations, and yes, that is close to my heart. It is a fundamental truth that transatlantic cooperation makes us stronger than when we are apart, and that’s not rocket science but simple common sense, as world history since 1945 has shown.

This is the rarefied international elitist circle that David McCormick is a part of. This is who he is. And now, amazingly, Klaus Schwab's Global Citizen comrade is presenting himself as a staunch America First Republican, pouring money into his effort to capture a U.S. Senate seat and, um, finding himself the fortunate recipient of outrageously positive puff pieces in ostensibly conservative news outlets such as Breitbart and The New York Post.

No mention is made of the Republican candidate in Pennsylvania Breitbart can't stop writing rosy articles about, whose wife is helping Klaus Schwab devise that global supra-government as he drapes himself in an outdoorsman vest and waves an America First flag.

mccorms by N/A is licensed under Video Image N/A

Read our latest news on any of these social networks!

We will send you breaking news right to your inbox

What happens after three doses of the Covid shot? Censors don't want you to know

Team Trump: Americans should not be surprised to find themselves at war with Russia

Ridin with Biden is dead last at 2023 Pegasus World Cup